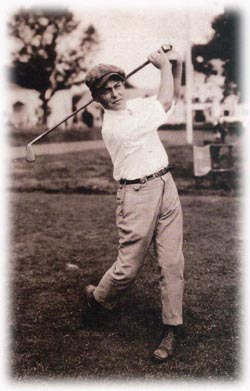 The GSGA was incorporated, its first constitution and by-laws were published, and its first Board of Directors was elected. Lowry Arnold of Atlanta was the first president.

Robert H. Martin of Atlanta, a member of the original Board of Directors, donated the permanent trophy that would be presented annually to the Georgia Amateur champion and kept at his club for the ensuing year, a tradition that continues today.

The Amateur Championship had become so popular that it was decided to hold a qualifying round on Tuesday of tournament week, with 128 players earning a spot in the flighted championship field. John Oliver of Valdosta won that year’s Championship at Radium Springs Country Club in Albany.

In the year following his legendary “Grand Slam” and his retirement from competitive golf, Bob Jones was elected to the GSGA Board of Directors and also made an honorary vice president.

The Board of Directors approved an annual donation of $100 to the Tifton Research Experimental Grass Fund. This continues today, as the GSGA joins other golf and turf organizations in Georgia in providing research funding to the University of Georgia turf teams at the Athens, Griffin and Tifton stations.

The GSGA and Georgia Section PGA began a challenge match between the best amateur and professional golfers in the state. The match, originally named the GSGA-GPGA Challenge Cup, was held annually through 1987 and has been played biennially since then.

The Georgia Junior Championship was established, following considerable study and discussion by the Board of Directors. The inaugural event was played at Athens Country Club and the first champion was David Joesbury.

The first statewide handicap computation service was administered by the GSGA and offered to Member Clubs through Minimax of Dallas, Texas.

The GSGA purchased its first course measuring instruments and began planning to rate courses for its Member Clubs. Floyd Doss (left) of Ft. Valley was hired as GSGA’s first executive director and full-time staff member. His first office was located in his home in Perry. Doss would hold the position until 1979.

The Junior Sectional Program began, with more than 2,000 participants during its first summer of operation. This program continues today as an entry-level competitive experience for young golfers, and it has spawned many other local competitive organizations and events around the state.

The Georgia Junior Golf Foundation was chartered. This organization, a joint venture of the GSGA and the Georgia Section PGA, today manages the Junior Golf at Schools program among other junior developmental activities. The GSGA offices relocated to Macon in August.

The Georgia State Golf Foundation awarded its first round of scholarships to four students, including Charles “Chuck” Palmer of Lindale. Palmer is currently serving on GSGA's Executive Committee. 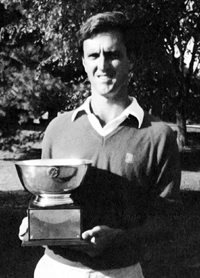 GSGA and the Florida State Women’s Golf Association formed the Georgia-Florida Women’s Team Matches, an annual match featuring the top female players from each state. Georgia hosted the inaugural event at the University of Georgia Golf Course in Athens.

The first Mid-Amateur Championship took place at Coosa Country Club in Rome, with Ross Johnson of the host club as the first champion.

The GSGA began testing the GHIN handicap computation system, and began a four-year plan to re-rate all Member Club courses in accordance with the USGA’s new Course and Slope Rating System. The first three courses to be rated under the new system were Atlanta Athletic Club, Ansley Golf Club and Perry Country Club. 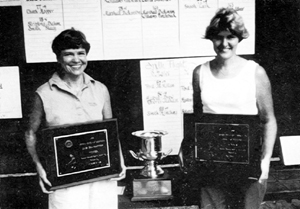 The naming of a Player of the Year Award was approved, in accordance with a point system that was developed. Allen Doyle of LaGrange was the first winner, and he would earn a total of seven during a career. The Board of Directors approved the concept of the committeeman level of volunteer service, as a way to encourage and review potential new members of the Board. 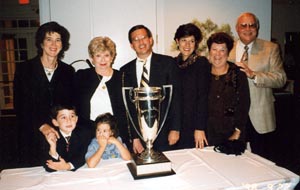 The Senior Championship was re-instituted for the first time since 1971. The winner was Johnny Skeadas. Following his passing in 1997, his family gave a trophy to the GSGA in 1998 to be awarded to the champion each year.

The GSGF awarded the first “Kids in Golf” scholarships. These were the forerunners to the current Yates Scholarships, for employees of GSGA Member Clubs or their dependents. 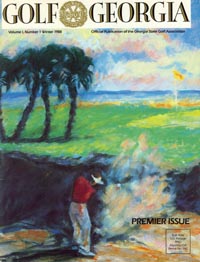 The Association’s membership magazine, Golf Georgia, made its debut, with four issues published in that year. 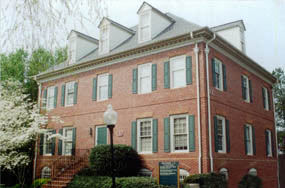 In January the Association purchased its own headquarters building (pictured) on Village Parkway in east Cobb County.

President Andy Bargeron presented the first President’s Service Award to Billy Peters of Blakely, GSGA president from 1981-83 and Championship Committee Chairman from 1984-2002. This award was the forerunner of the Bill Todd Award, which is presented annually to a volunteer for meritorious service to the GSGA.

The Association dedicated its first-floor conference room as the GSGA Museum and Library, allowing for Georgia-related golf literature, historical artifacts and photography to be displayed.

The Association topped the 300 mark in Member Clubs, finishing the year with 318. 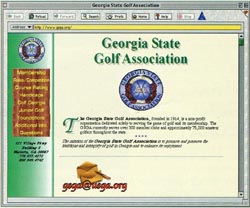 The GSGA’s website, www.gsga.org, was launched. The site has undergone several redesigns since its initial launch, with the most recent in 2018. 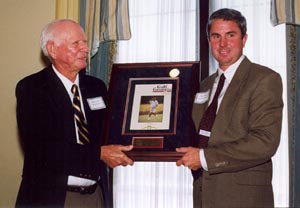 The Tommy Barnes Award was given to the overall GSGA Player of the Year. Bill Roberts (right), the 1998 Georgia Amateur Champion from Pine Mountain, receives the first such award from Barnes.

The GSGA began a new service called Computers For Clubs. Each GSGA Member Club with more than 100 members would be provided computer hardware in addition to the GHIN software package. 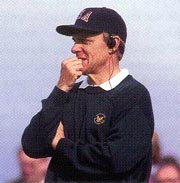 The Walker Cup returned to Georgia, this time to Ocean Forest Golf Club on Sea Island. Atlantan Danny Yates served as the United States team captain for the biennial competition pitting male amateurs from the U.S. against a team from Great Britain and Ireland.

The GSGA introduced real-time scoring for four of its major championships via its web site. The USGA permitted golf clubs to offer their members the option of posting scores via the Internet. This is available to GSGA members at www.gsga.org if their club has approved this posting option.

The GSGA joined with other Georgia golf organizations to fund a public relations lobby forum, the Georgia Allied Golf Council. This group monitors legislation that may affect the state’s golf industry. GSGA began providing GSGA/GHIN membership cards to individual members in the January-February issue of Golf Georgia. The GSGA implemented a Handicap Index revision e-mail option, with more than 20,000 individual members enrolling in its first year. 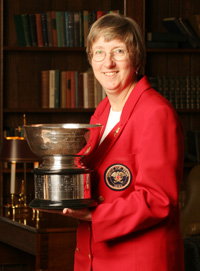 GSGA unveiled Online Registration via its web site for entry into its competitions. Over 70 percent of GSGA competitors used the feature during the inaugural season. 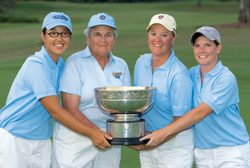 GSGA introduced a online membership plan via its web site. Over 300 Georgia golfers joined GSGA through this method during its initial year.

The USGA elected Walter W. Driver Jr. of Atlanta (right) as its president. Driver is the third Georgian to serve as USGA president, following Reg Murphy (1994-95) and the late Fielding Wallace (1948-49). 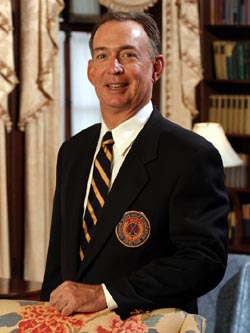 The Georgia State Golf Foundation was honored to receive a gift in excess of $1.5 million from the estate of Richard R. “Dick” Franklin (left), who served as GSGF’s president from January 2004 until his untimely death in September 2005.

The biennial GSGA-GPGA Challenge Cup was renamed the Billy Peters Cup Matches to honor the Georgia Golf Hall of Fame member and longtime volunteer for both organizations. The Billy Peters Trophy had been awarded to the match winners since 1997. 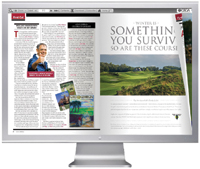 GSGA past president Gene McClure was named the winner of the USGA’s 2008 Joe Dey Award, recognizing his “meritorious service to the game” as a volunteer. The award is named after the late Joseph C. Dey Jr., who served as USGA executive director for 35 years and was later the first commissioner of the PGA Tour.

Georgia won the USGA Women’s State Team Championship for the second time in five years. Captain Sissi Gann of Kathleen, Dori Carter of Valdosta, Laura Coble of Augusta and Mariah Stackhouse of Riverdale captured the title by leading wire-to-wire and posting a nine-stroke victory over the next closest team in the standings.

The GSGA entered into an agreement with the Georgia Department of Economic Development to manage the ongoing activities associated with the Georgia Golf Hall of Fame. The terms of the agreement authorize the GSGA to host the banquet to honor inductees; store memorabilia of the members of the Hall of Fame and display as available; and have right, title and interest to the trademarks, trade names and logos associated with the GGHOF. 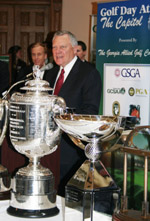 The Georgia Allied Golf Council hosted "Georgia Golf Day" at the Georgia State Capitol, bringing to life a 2010 economic impact study that stated golf has an annual impact of $2.4 billion in the state. Resolutions were passed in both the House and Senate, saluting golf in Georgia and its events and activities. 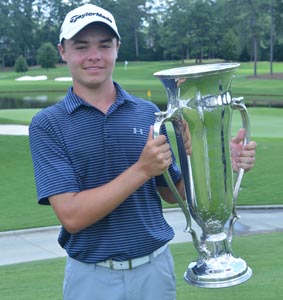 Atlanta Junior Golf was brought under the umbrella of the GSGA, forming a statewide Georgia Junior Golf program which provides opportunity for junior golfers to better their skills, compete in tournaments and prepare for a future in golf.